Salinas, CA
We've been off and on busy since the last post.
The garden is getting over grown with
tomatoes, peppers, zucchini, and cucumbers.
I should have taken a picture before posting this blog!
I've decided to try growing dahlias,
and they are beautiful!
I combined it with a couple of the roses
to make a nice bouquet. 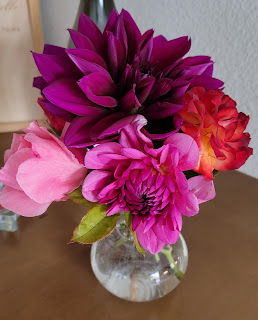 Of course we have gone to Hahn
with several different friends.. 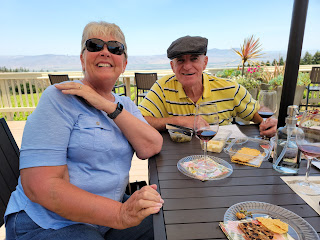 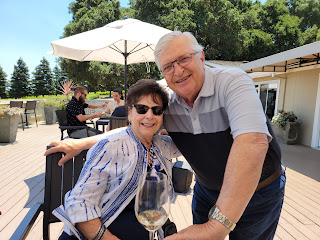 The grapes are looking great this year,
and the view always makes me smile.

Cooper loves to lay out in the sun
with me, what a goof! 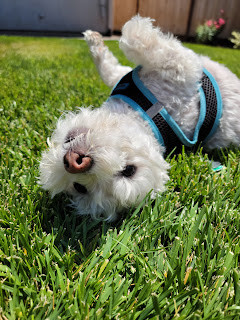 George's birthday was Tuesday,
so we took a trip to San Francisco.
Since we had to take Cooper,
I found a dog friendly hotel,
the Hotel Caza on Fisherman's Wharf.

We were upgraded to a 'city view' room,
which we laughed at.
Through the dusty window we could see
the fog enshrouded Transamerica building. 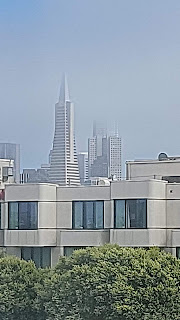 After we got checked in on Sunday afternoon,
we walked the few blocks down to Fisherman's Wharf.. 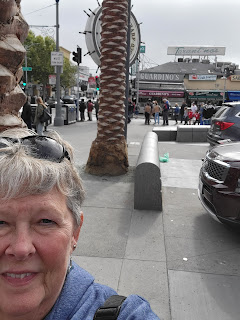 The hotel had given us a 10% off coupon to
a great Italian Seafood place called Cioppino's.
Sitting outside was nice, if a bit chilly.
Cooper was good, and ate a few bites of sourdough bread :-)

The next day, Monday, we walked down to Pier 39
to walk around and in some shops.

Cooper was enthralled by all the sights
and smells of the city.

There are some great views of the bay
from the pier.
As is usual, SF was foggy and chilly!
We had a view of the Golden Gate Bridge, 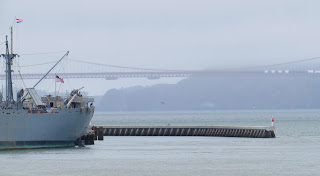 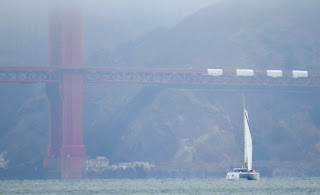 George really wanted to get a sourdough bread bowl
with chili..
so we went to Boudin..home of the best sourdough!
I opted out of the bread, but got a wonderful
cup of clam chowder with a Caesar salad. 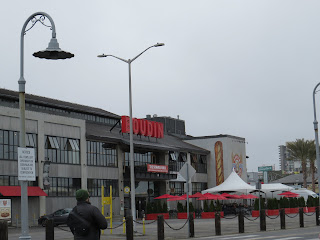 After getting lunch and shopping a bit,
we decided a rest was in order.
Cooper was pooped from all the walking,
and I think that George was too!

Once everyone was fully rested,
we made our way to Ghirardelli square.
Always love that area!
On the way there,
we trudged uphill first to take
a look at Lombard street.

San Francisco has very steep hills,
and in 1922 the residents decided to
change the steep hill into 8 hairpin turns.
Hydrangeas make it a beautiful street.

Once we got to the top,
we made our way downhill to
Ghirardelli.

Views of the city and the bay are terrific..
Coit Tower..

Of course ice cream sundaes were on the list..

and Cooper got his first taste of ice cream..
vanilla of course!

That was the end of Monday,
we were all pooped then!
Tuesday was check out day,
so on our way out George
drove through the city a bit,
and down Lombard for good measure.
We really enjoyed our time there!