My son Adam, who is a pastry sous chef at 7th & Dolores steakhouse
was recently part of a Chef Duel held at Folktale Winery.

I accompanied Adam's father in law over to watch the goings on.

The duel paired two chefs preparing a savory bite,
then the two pastry chefs with a sweet bite.

The event was held in the winery's barrel room,
which was a perfect place!

Each pair of chefs were given a list of items
that had to be in their dish.
The savory bites were prepared with octopus,
basil, ube (purple yam), stinging nettles(!),
and a few other items I can't remember.
3 judges then tasted and judged based on level of difficulty,
taste, and presentation.
The judges vote counted for 50% of the total vote.

All of the crowd got a vote to put in a ballot box,
to vote for the best chef's dish.
This counted for the other 50% of the vote.

While things were going on,
Adam was at his station preparing his dish. 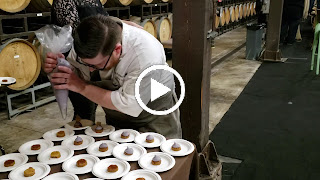 Adam's ingredients had to include the ube,
micro-basil, steel cut oats, and pomelo.

He created a brown sugar blondie,
topped with a purple yam mousse and steel cut oat crisp,
sprinkled with olive oil infused pomelo crumble,
and micro basil garnish.
Oh my!
It was so good, I had a few :-) 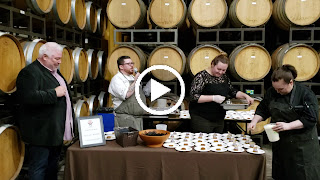 Unfortunately Adam lost the judges vote,
but won the popular vote :-)
The tie-breaker was a quick game of corn hole.
Jessica, the other chef won soundly :-( 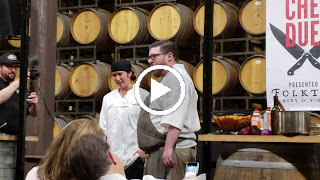 We had a great time, and Adam was thrilled to be included in this duel.
He'll be headed over to Pebble Beach next week for the
Pebble Beach Food & Wine event.

Meanwhile at the park..

the poppies are beautiful!

We are happy with life, and Cooper!

Norma took this with her cute little camera,
much like a Polaroid.