The joy and frustration


It's been a crazy couple of weeks!

It's been busy at work, getting ready for the busy season.
There was the storm damage to get cleaned up,
and there is a KOA inspection coming up the end of April.
George got to play on the Kubota tractor, which made him happy. 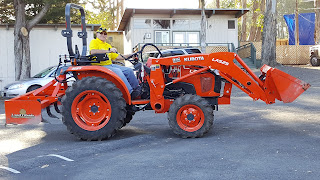 We found out that the new RV (Harvey II)
would be ready for us to take delivery this week.
Our new employers were prepared for our departure,
so we felt good leaving for awhile.
George found out that we would not be able
to overnight in the LaMesa RV lot due to liability issues.
I have a friend (since 1st grade!) who lives nearby,
and she graciously invited us to stay there.

George and I drove up Hwy 101,
over the Benicia-Martinez bridge (had to pay $20 toll!),
and onto Hwy 680 to 80 to Davis, CA.
We pulled into the LaMesa RV lot around 1:30,
where within a few minutes they took the Montana away
with one of their forklifts.

We spent the rest of the afternoon and night at my friend MJ's & Mike's house.
Mike did some dinner prep, pot roast & veggies!
MJ recently broke her leg, so was relaxing,
but I forgot to take pics! 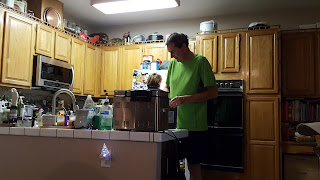 Tuesday morning we got up early,
went to breakfast,
and got to the RV lot at around 9:30
where we were supposed to do a walk through.
First there was a bit of confusion.
They didn't think our Vilano was on this lot.

Then the Sales Manager was upset because he 'didn't get told'
that we were taking our Splendide,
swapping our tires,
mattress, theater seating,
and satellite.
Hey, not our fault you guys don't communicate with
the other salesman from the Phoenix LaMesa!

After we got him calmed down we sat down
with heads in hands wondering if we did the right thing :-(

Eventually they figured everything out and parked our 2 units
side by side by the shop. 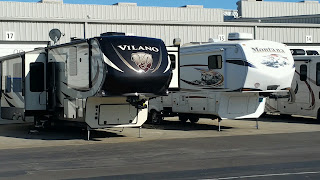 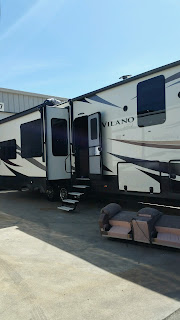 While all that is happening another tech
is trying in vain to find the satellite controller cable.
Once he found it, he realized that it was wired backwards,
so he had male to male ends.
****sigh****

In the meantime..
we decided to book a hotel for a couple nights.
The Sacramento commute traffic from MJ's to Davis
took way too long.

While all the craziness of the day was going on,
George drove me to the hotel so I could rest :-)
He went back to find they had swapped the Montana tires,
put them on the Vilano rims.
Wow, one thing went right!

Last night we grabbed dinner at a local Mexican restaurant,
and this morning had breakfast here at the hotel.

We arrived at around 9 this morning,
to find them still working on the satellite.
They got ahold of VanLeigh,
who had to approve a warranty claim
to fix the satellite cable!
Sheesh!

We found a Beach Hut Deli nearby, had lunch,
then came back to find out they had started
to move our Splendide washer/dryer combo
to the Vilano.
Or so we thought...

The tech said that things would have to be modified
for it to fit!
This is after the factory prepped for it supposedly.

I'm not sure what finally happened,
but before we knew it,
Eric the tech drilled a hole for the dryer vent. 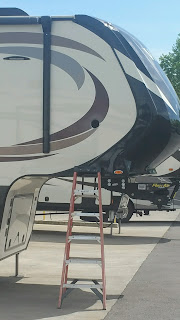 At the end of the day we were told by tomorrow at 10 am
the Splendide would finish being installed,
the mattress swapped, the RV detailed,
and our walk through would begin.

At that point we can begin the moving of our belongings over.

A bit of green for us!


It was nice to wake up this morning
with some green in our bank account.
Oh yeah, perfect for St. Patrick's Day!

We both have been getting lots done in the park.
One day I went with George and cleaned up
the playground, but was so busy I didn't take pictures.

George and another workamper, Dennis,
worked on fixing the lights down at the entrance. 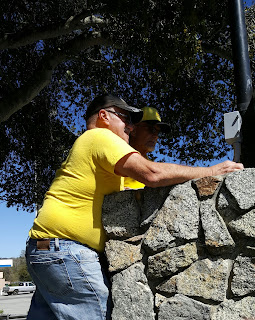 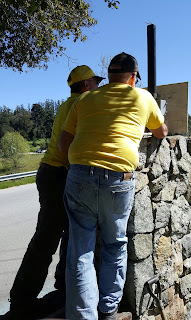 I got to go up in the attic above the office
and finish organizing Christmas decorations
and old records that are ready to be shredded.

We drove up to Morgan Hill after our shift
on Saturday and met up with Greg & Connie.
Of course we went out to eat,
and Connie and I drove up to Anderson Dam.

All the reservoirs around this area are filled to capacity.
They're having to release water to relieve the pressure on the dams. 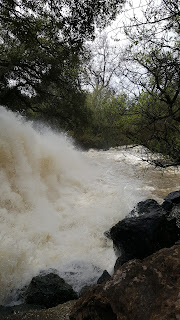 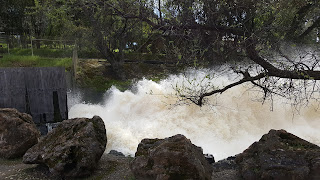 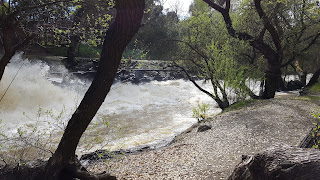 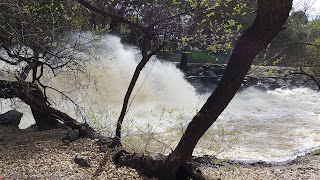 It's pretty impressive!
The roar of the water was loud!

I did some cleaning up of our site too.. 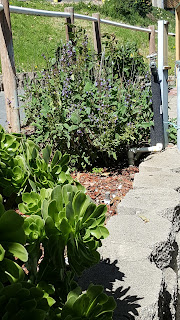 There is a nice rosebush that will
have some nice buds soon.
We've seen a family of lizards sunning themselves. 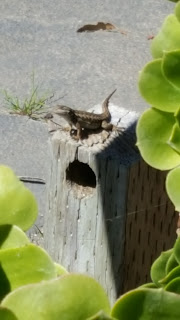 We're enjoying being back to work,
and earning some 'green'.
Mom took her car back the other day,
as our schedule prevents us from
being able to take her around to appointments.
She's doing just fine without us though :-)

Word is the new RV will be up north next week,
so maybe we'll have a new home soon!


Well we finally made the move 41 miles north to Prunedale.
This KOA is an older campground that has been here as long
as I can remember.
It used to be called Cabana Holiday,
and is a combination of cabins, RV sites, and a mobile home park.
It was bought by a company
that owns several KOAs in California. 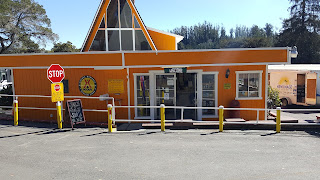 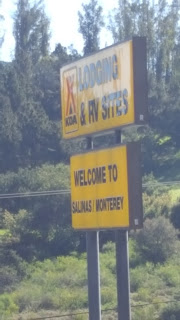 We got a really nice site,
actually the best one in the park! 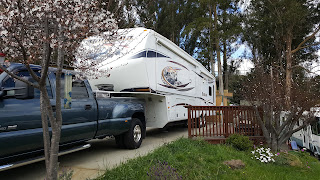 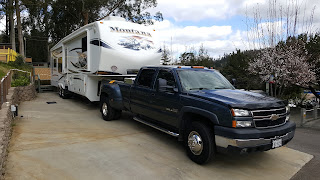 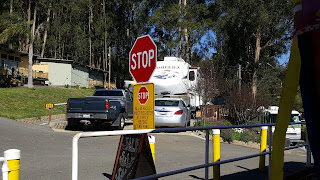 It's very close to the office, which makes it very convenient :-)

Right now we're training, so we've been working 6 hour days.
KOA has their own reservation system, in old-fashioned DOS :-(
It's not that complicated, but not the easiest to learn.
We both got tee-shirts and windbreakers in KOA yellow.. 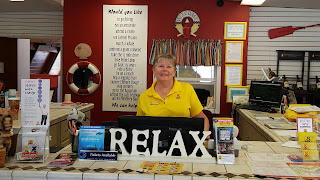 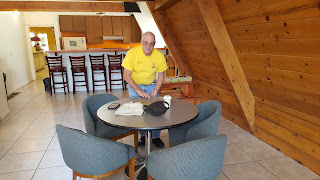 For the meantime I'm in the office,
and George is helping with different projects outside.

We have a great clubhouse with a pool table,
ping pong table, and TV. 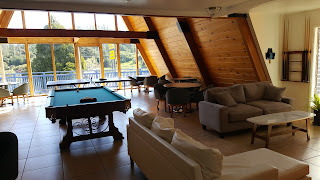 The office is nice too. 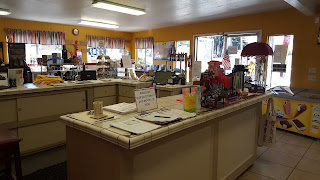 The store is well stocked with all kinds of goods. 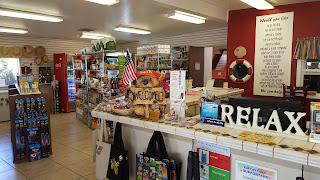 There is a great pool as well.
It's being renovated at the moment. 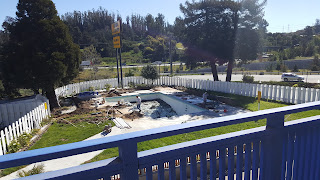 Since this job keeps us in California, and close by Mom,
we've decided not to return to Custer.
George and I can stay here until the fall and beyond!

We have an update on our new RV.
It's looking like the week of the 20th,
so we have some light at the end of the tunnel!

A Change of Venue


As you all know, we've been sitting in Greenfield, CA
at a beautiful RV park since late September.
George and I came here after spending the summer
working in Custer, SD.
My mom had some health issues,
so we wanted to be able to be nearby if she needed us.
We've been fervently trying to find a workamping job
anywhere within an easy radius of  Salinas.
My mom has graciously been helping us out with the rent.

After 5 months, we are happy to say that our prayers were answered!
We got a call from a KOA that is nearby,
wanting to hire us to work there!

We'll be moving from Greenfield to Prunedale (where I used to live!).
Tomorrow we'll make the 41 mile trek,
and get settled in to our new home.
I'll post pictures tomorrow.

It should be a typical workamping job,
me helping in the office,
and George doing outside duties.
We'll get paid an hourly rate plus our site!
It will be nice, as we will be only 15 minutes from Mom,
instead of the 35-40 minutes.
We'll also be a lot closer to our friends up at Coyote :-)

Our new RV is progressing,
being built in their factory in Burnsville, MS
There's a great Facebook page that is moderated by
the workers..
we even got a picture of our RV in the factory.. 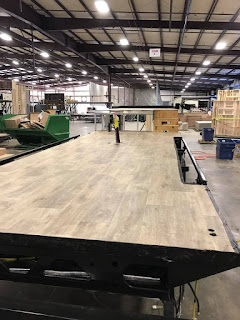 It's targeted to be here in CA by the 13th,
we're getting impatient!