Hope everyone had a great Easter!
George brought me home some nice roses,
and I made a ham, scalloped potatoes, and veggies
for our quick night off. 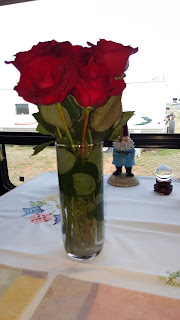 As we have found out here in Oklahoma,
sometimes when you least expect it
it's back to work.
Last blog (two weeks ago!)
we had just finished working a gate.
We had one day off,
and started another shared gate on the 17th.
It's a bit of a drive, about 31 miles one way,
but we didn't want to move to another park just yet.
George and I are working with another couple this time,
they are working noon to midnight, and we are
taking the midnight to noon shift.
It's been working out pretty well,
with George and I swapping every other day
so we both keep up with our sleep.

I got some nice shots of the sunrises there.. 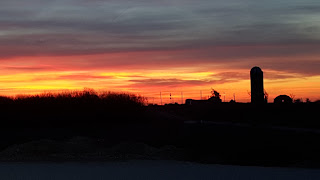 ..and the fields surrounding it. 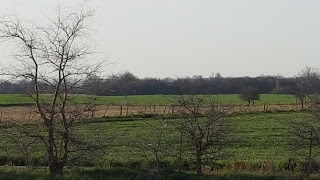 We just found out that this gate will end at 6 pm tonight,
so our last shift ended at noon.
There is a lot of activity...so we hear...
so it's a matter of time before our next gate.

Time is going by pretty quickly.
Another month and a half we'll be heading to Custer!


George and I have just finished two short-lived gates,
sharing them both with two other couples.
We just got an e-mail from our boss
telling everyone that things have slowed down,
but it's only 'temporary'.
We have no choice but to go ahead and hang tight,
hoping for a few crumbs.
Our job in Custer won't start until mid May,
and not too much of a chance to get a paying job
between now and then.

Here's a cool aerial picture of our last gate:

When the crew is all finished, you would never recognize
the area where they were.
The reseed the land (or replant what was growing there),
and all that is visible are a few pipes.
Even the cattle are back grazing there :-)

Yesterday we took a ride into Oklahoma City via Route 66. 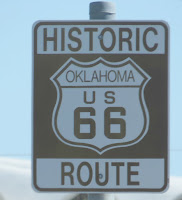 We really didn't have any destination in mind,
although I did some research of places to go.
Lots of museums, a horse track, some lakes,
and the stockyards.

To start, we put the stockyards in our GPS.
We figured, hey it's free, and we might want to save
money to spend a bit on lunch :-)

Route 66 goes through some small towns,
Yukon (home of Garth Brooks!),
Bethany (home of Shannon Lucid!),
and Warr Acres (C.B. Warr!).
Each town has something on their sign to tout who's lived there.

We followed our noses just fine to Stockyards City.
George found a free parking lot within walking distance
of downtown and the stockyards themselves.

First we took a look at Main Street and the old buildings.. 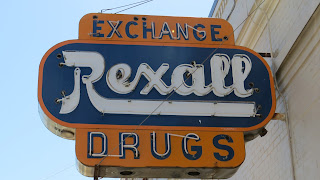 Before we walked over to see some cattle,
we wanted to try out Cattlemen's Restaurant.
Not sure I would've wanted a steak after seeing cattle in the stockyard :-)

We decided to sit on the Cafe side, which turns out to be
the original side of the restaurant.

It's a pretty cool place,
and the prices weren't too bad.

George ordered a chopped sirloin steak,
and I had a luncheon portion of a steak.
Both were just wonderful!
I forgot to take a picture until it was almost gone..

We also shared a local beer which was great.. 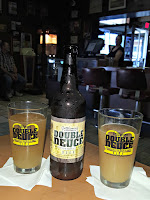 After we were quite full,
we walked through the local department store, Langston's,
which is a 'must' according to the internet.
I couldn't believe all the boots, hats, and other western wear. 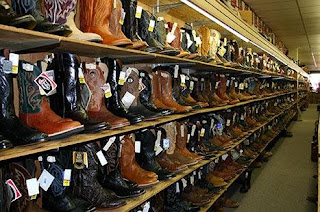 We then walked over to see some cattle. 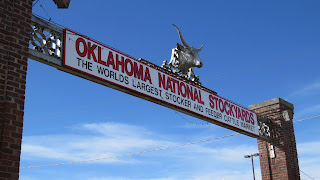 It's pretty cool as you can see the buying pens,
as well as the selling pens. 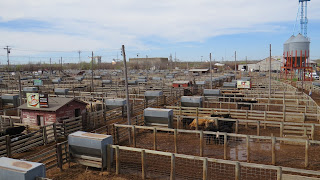 Sellers bring their prized cattle,
where they're put into pens by lots.
Buyers are there at the auction
and then bid on the lots,
where they're then shipped back to their ranches.
Or at least we think it's how it works :-)

Regular people like us can watch the auction,
see the cattle in their pens,
and just watch the whole process.
We were lucky that the auctions are held on Monday.

The cowboys herd the lots into the arena.. 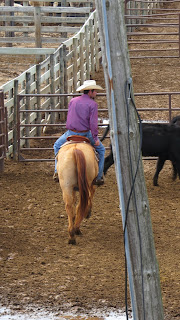 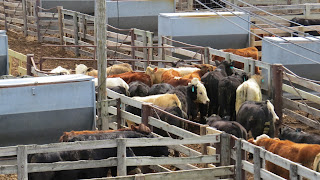 Then the auctioneer starts the process. 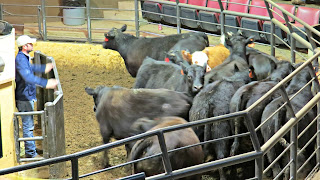 It was fun to watch, but George was gagging from the smell :-)

The heifers and bulls are kinda cute! 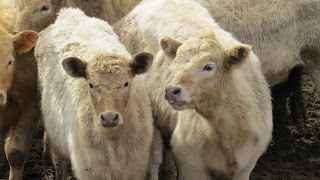 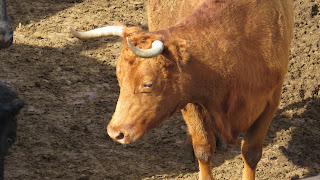 Lots of cattle trucks waiting to be loaded up. 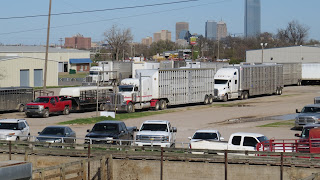 It was a pretty cool day!

On the way home I had to get a picture
of one of the other things we see a lot of in Oklahoma.. 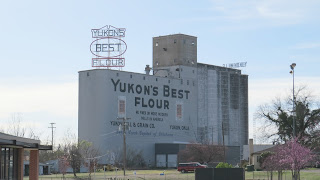 Lots of grain mills and silos!


We finished our last shared gate in a short 5 days,
with George and I only working 3 half shifts.
There was a day between then we started on another one.
For now we're sharing again,
but supposedly there are a few more getting ready to open.

The wind for 3 days straight was so frightful
that we kept our bedroom and one living room slide closed.
The sustaining winds were upwards of 28 mph,
with gusts of 45-50!
At the gate they pull the crane down for safety.
We got lucky and the storms that brought
tornadoes and flooding to parts south of us
skirted around us :-)
Yesterday was beautiful in fact, sunny, warm and white puffy clouds!

We took the time on our day off to do some grocery shopping
at the closest Walmart in El Reno.
After putting everything away,
we didn't want to cook..:-)

George and I had heard about this local joint in Okarche
called Eischen's bar.
We have an app on our phone called TV Food Maps.
Our favorite shows are the ones on the Food Network,
so we can find interesting restaurants where we travel.

Okarche is a cool little town.. 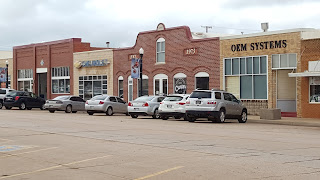 This restaurant has been here since 1896,
and you can read all about it on the link above. 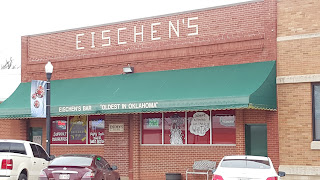 It's pretty cool inside.. 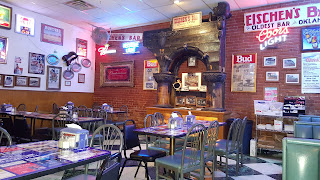 In 1993 Eischens caught fire and pretty much all that was left
was this beautiful back bar piece that had been
in the building since 1950.
They were able to save it,
and it's on display with some other mementos from the time. 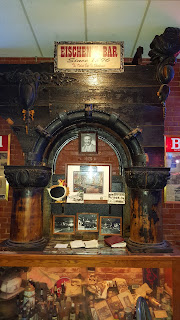 Guy Fieri featured this place on Diners, Drive Ins, and Dives
back in 2009 (click the link to watch the short piece about it).

All the hype didn't disappoint!
They have a very limited menu,
but it makes the choices easier :-) 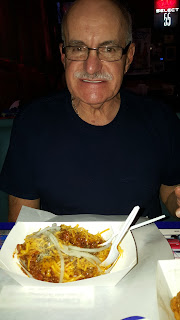 He said it was great!
I had to have their famous fried chicken.
For $14 you get a whole fried chicken, 8 pieces in all. 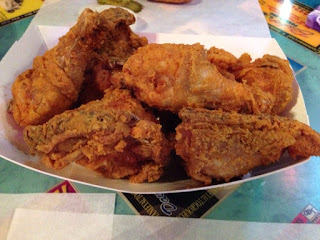 I have to admit, I only left 2 pieces to bring home :-)
The chicken came out so hot from the fryer I could barely bite into it.
The outside was crispy, but light,
and the chicken was tasty and perfectly cooked.
Not sure how they seasoned it, but it was perfect!

Hopefully we can go there again before we leave the area :-)


We got settled in right away to our new area for the moment.
I have to say the 'park' is much nicer than the one in Watonga.
At least we have room to breathe,
and nice pasture land with wind turbines surround us.

Oklahoma sure makes use of the constant wind here!

George and I started a new gate the day after we arrived.
Our boss sent all 3 couples up to this area,
and we shared a gate for the short 5 days it was being fracked.
Each of us made enough money to at least pay the rent for the month,
but that was about it :-(

We sure aren't thrilled that we're not making the money
we thought we would,
but it is more than we'd make if we were workamping for site.
We've already made more than half of what we made at Amazon,
and we've only been doing this for 6 weeks!

I won't get into a discussion about the effects of fracking.
We hear both sides to the story of course,
and we are helping our life on the road by helping in the industry.

So now we sit, in the wind (grrr), and wait for the next gate.
Okarche is a small little town,
but we are going to go to one of its claims to fame..
Eischen's Bar.
We want to try some of their 'world famous' fried chicken :-)

We'll let you know how that turns out!