Friday morning we drove the truck south
to Houston to be able to go to
Bill's memorial service.

Traffic was terrible around the cities on the way down,
so it took us 9 1/2 hours :-(
We arrived at Connie's house at about 7:30,
but just in time for dinner!
Her sisters, husbands, nieces, nephews,
and two daughters were all there.
It was a houseful!
George and I feel like part of her family,
they're all Crazy Columbians!

Saturday we headed over to Bill's daughter Angie's home.
George's daughter Heather, and her fiance John
flew in from Pennsylvania to be there as well.
We wanted to visit for a bit before heading over
to the church in Katy, TX for the service.

The minister did a lovely job.. 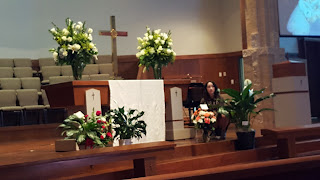 There were lots of people there,
Bill was very loved.

Afterwards, we went to Connie's sister's house.
It was a great gathering of Columbians,
who love to party :-) 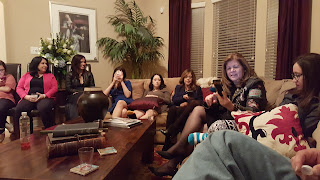 We sat around after eating and told Bill stories,
laughing so hard we cried.

Sunday Angie & Wes brought Heather & John
to Connie's house for a visit.
Connie brought out all of Bill's photo albums
so that Angie could take them home.
She and Heather grew up together,
so they had a great time looking through them.

Today we drove back to Watonga.
Tomorrow we start a new gate in Okarche,
which is just about 40 miles east of here.
For the short term we'll be sharing a gate
until a couple others open up.

A new area to check out!


Yesterday we got the word that the gate we were on
would finish up early evening.
It's fun watching them pull all the equipment out,
taking it to the next location.
Some of it is just amazing!
At this location there were 8
sand 'castles', or towers.
Trucks bring sand to fill them up
to use in the fracking process.
The towers have wheels on them,
so that they just pull them down
using hydraulics,
a tractor backs up, hooks up, and takes off. 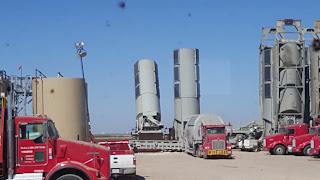 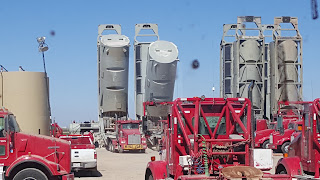 It gets very busy during this ramp down process.

The other couple that was with us in Foster, Lori & John,
are up here now as well, waiting for a gate.
The four of us had dinner together at a local place
called 'End O' Main'.
The restaurant is at the end of Main street :-)
It was pretty expensive for a local place,
and the food wasn't worth the price,
but we had a good time getting to know them better.

Now we all sit and wait again for something to open up.
Friday we'll be heading down to Houston, sans RV,
to attend Bill's memorial service.
Our boss, Mike, is thankfully working around that trip.
We'll come back Sunday sometime.

We can't believe how lucky we've been
with the weather this winter.
Yesterday was 80 degrees!
After work I had shorts and flip flops on,
woo hoo!

Oh, and we know our summer plans now as well.
We got a job working at a private campground
in Custer, SD.
George and I met a lady at Amazon who
manages it every summer.
She hired us basically on the spot!
The campground is called
Flinstones Bedrock City for now.
New owners have taken it over and
it will be called Buffalo Ridge Campground
or something like that. :-)
We're excited to be able to be in Custer
and do some exploring.
We took a trip there before RVing
and really love the area!
The best part is we get pay plus our site.
More details to follow..

A new gate, and sad news


Shortly after our last blog post we got the call.
A new gate opened up for us in Watonga,
approximately 2 hours north.
We needed to be there to start at noon the next day.
Sometimes the calls come and the guards may only
have a few hours to get set up and working.
It didn't take us long to pack up, hook up,
and travel the 127 miles to our new place.

We have soon learned that the best RV 'park'
doesn't necessarily have the nicest ambiance.

There are dozens of these 'parks' set up
for the oil field industry,
and can be just about anywhere.
It's all about the proximity to the areas
where your gate may be.
For us, who cares, as our 12 hours off
are spent sleeping, packing our meal for our shift,
and a small amount of TV watching.

Our new 'gate' is at a smaller well pad,
one that may take only 5 days +/-
to complete the fracking process.

Sometimes getting to the guard shack
means driving on a few miles of dirt road,
winding around until you find it.
This current shack is only 2 miles from the main highway,
but still down a dirt road :-)
It's next to a farmer's field,
with cattle grazing..
gives me something to watch.

I can say one thing..
the sunsets are beautiful! 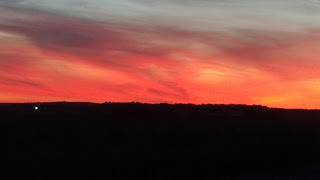 Earlier in the week, we got some very sad news.
George's brother Bill had a massive heart attack and died.
George had just talked to him a few days earlier.
He was only 62 :-(
We are so glad that we got to spend time with he and Connie
while we were in Texas for the 2 weeks after the holidays.
He was a tremendous man and will be greatly missed.

One of my fondest memories of him is the first time we met.
George and I weren't married yet, and we flew to Houston
to spend a week with Bill & Connie.
We rented a Harley and did a drive with them.
It was a fun day! 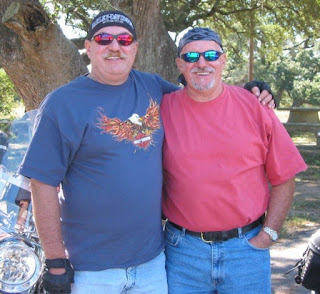 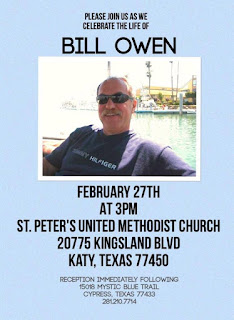 
We're still without a gate, so this paycheck won't be
as healthy as last one's :-(
In the meantime we've been hanging out,
and taking drives around the area.

George calls Verizon and Direct TV once in awhile,
to find out what they can do for us :-)
We're still good with Verizon,
and keep adding data to our plan
with a minimum of dollars.
We currently have 18gb,
since we have no 'free' wifi here.
When we drive into Duncan we take advantage
of any free wifi at restaurants, Walmart, etc.,
to update our phones.
We've even taken our computers to Subway,
which has excellent wifi to update them.

Yesterday Direct TV came out and upgraded our older receivers.
George had called them a month ago to find out if we were eligible,
but they said, nope.
Funny thing was we got an email saying we were.
He called again, got another person, and got the same answer.
Wednesday he called again and magically we were eligible.
Pays to be persistent :-)

Two guys came yesterday and 'installed' the Genie in the living room,
and the Genie Mini in the bedroom.
Well, basically he plugged them in and set them up.
We did pay a $49 installation fee, geez.

The downside was we gave up our old receiver
which had over 25 movies saved from free HBO weekends.
There is no way to save them!
(Trust me, we asked, we googled, and nothing)
We could have kept the old receiver,
but decided having all new equipment was a better option.

Although Wes & Mary Lou had gone north for a gate,
they came down after their's closed
to have dinner with Lori, John, George and me.
So last night, we all went to the only good restaurant nearby :-) 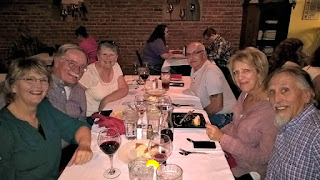 They are going on a cruise to celebrate their 50th anniversary,
while the rest of us hold down the fort so-to-speak.
We're all keeping our fingers crossed for some action soon!

Two weeks under our belt


We've completed two weeks on a gate,
and life is good :-)

As I wrote about previously,
there are 3 couples sharing 2 gates
at the moment.
The gate (or well pad) that we have been
sharing with Wes & Mary Lou
finished up the fracking process
and released us on Tuesday.
The other gate (or well pad) has approximately
10 more days until it's finished.
George is sharing that gate with Lori & John.

Wes got a call today and they're moving north
to another gate for a few weeks.
In the meantime we sit and wait
for another well pad to begin.

We have one paycheck about to be deposited,
$3200 for two weeks isn't too shabby :-)
We even got paid for the couple days we trained.
We do pay for our RV site, $100 per week, electricity included.
Hopefully another gate will open soon!

We went out to dinner last night with Wes & Mary Lou,
to a little Italian place called Giuseppis.
Of course George had spaghetti,
and I had chicken parm.

We're so glad our days off coincided,
and we were able to go out before they left today! 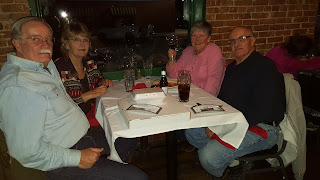 I'm sure they'll be back down here in a few weeks.
The industry has you moving a lot to fulfill their needs.

So far so good!