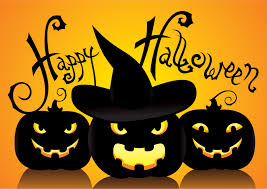 It's been a long week of work.
Thursday was our first mandatory overtime day,
and we both were exhausted at the end.
The mileage has gone up, 55.94 miles in 5 days, whew!
I've lost 10# in the one month span, woohoo!

We are so glad that this should be the end of picking
Halloween costumes.
The kids ones are sort of cute,
but the 'adult' ones...
(we wonder if some of these 'adult costumes'
are really for Halloween?) :-)

Last night we went to Garcia's for a great time and good food
with our friends Kathy & Martin.
It was a marathon laugh and talk fest,
we were there 3 hours before we knew it!

A few blog posts ago we had mentioned a
possible new workamping gig in the San Antonio area.
In the meantime they've had management problems there,
so we've decided that probably isn't a good sign.
We've continued to do research on other areas of Texas
or surrounding states for paying jobs after Amazon.

One job we've been doing a lot of research on is gate guarding.
George (or I really) weren't too sure we'd like
sitting on a dirt road (or muddy one!) near the border.
We weren't even sure that there would be anything available
due to the price of oil, and winter time popularity of the job.

Some fellow workamping friends of ours are doing a
non-traditional gate guard job in Oklahoma.
This job is different because you actually are in an RV park,
but commute to a guard shack at the drilling site.
We would actually be working 2 separate 12 hour shifts,
so double the income :-)
There are times when we are in the same guard shack,
and sometimes in 2 separate ones,
but it all works out.

We are still in the research phase, but we could earn
triple the money in the same period of time as Amazon,
without the physical labor.

A nice day in Louisville

Yesterday George and I celebrated our 4th anniversary!
We decided to celebrate by taking a trip up to Louisville.
It's about an hour and a half drive up I65.
The fall colors are just starting to pop out.

The one thing we wanted to visit was Churchill Downs and
the Kentucky Derby Museum.
Both of us love watching the horse races,
and used to go to Pocono Downs to watch them run
when still living in Pennsylvania.

I got goosebumps as we parked and walked to the entrance! 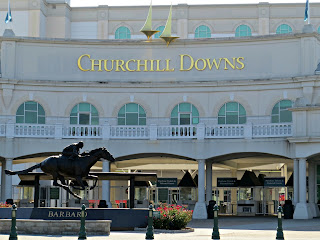 The first thing you see is Barbaro's final resting place. 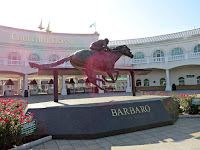 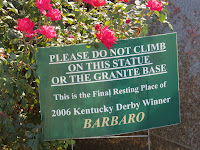 There are several tours offered by the facility.
We chose the Historic Walking Tour, which
is included in the admission fee to the museum,
and the Behind the Scenes tour which was $11 per person extra.
For $50 total, it was a day long tour of pretty much everything.

The Derby Museum is chock full of everything about horse racing.
There is a section of the starting gate so you can see how tight a fit
it is with the horse and rider locked in.. 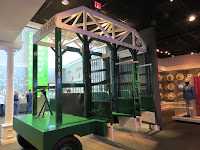 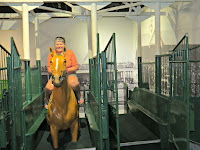 There are hands on exhibits, where you can 'be the jockey' :-) 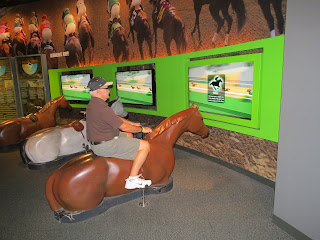 The racing silks are nicely displayed as well. 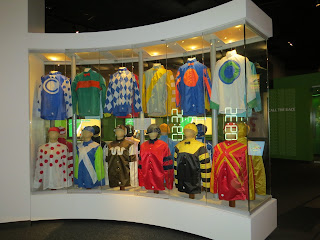 We started the walking tour,
which started right outside.
Our tour guide gave us the history of the Downs,
it's been in operation for 141 years!
The name comes from the fact that it now is
on the farm that once was owned by the Churchill family.
'Downs' comes from horse racing's roots in England,
where the land that horses raced on were 'downs'. 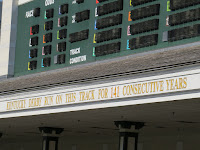 We got to see where the horses are led
into paddocks to be checked before heading to the track. 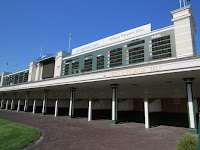 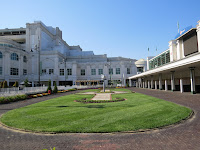 They are paraded around under the famous horses' names that won before them. 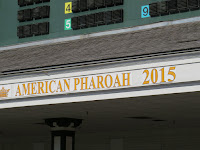 Next we got to go into the stands to see the track.
Imagine these bleachers filled to capacity on Derby Day! 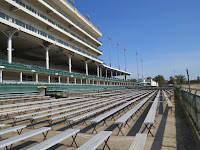 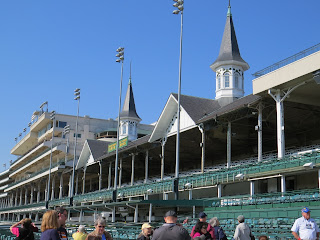 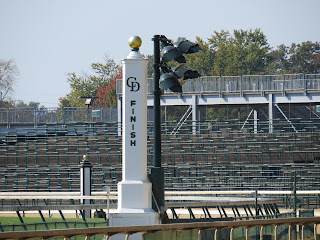 In between tours, we got a bite to eat in the Derby Cafe.
George had a bowl of Burgoo, which he said was great,
and I had Smoked Ham Wontons. Yummy!
We couldn't start our second tour without a piece of famous
Derby Pie! 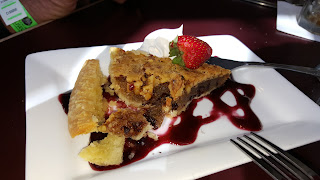 Finally it was time for the second tour,
a Behind the Scenes walk around the building.

First we got a bit of history on horseshoes.. 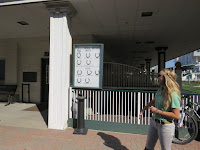 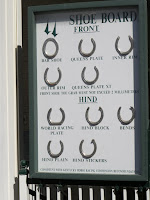 Then this gem, a 40' by 7' mural of every jockey
who has won the Kentucky Derby.
It is continually painted each year by Pierre Bellocq,
a longtime Daily Racing Form cartoonist. 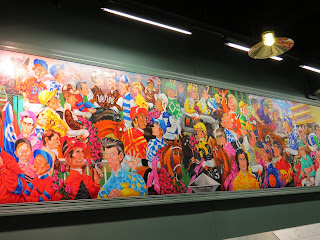 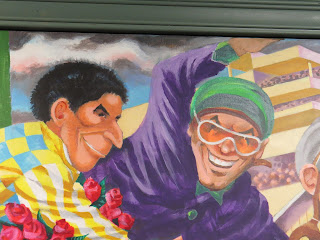 The tour led us through Millionaire's Row.
For a mere $6,999 you can reserve a seat at a table
with your rich friends.

You do get an incredible view of the track.. 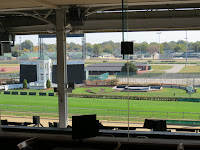 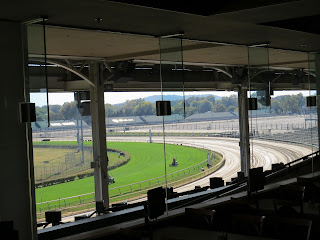 We thoroughly enjoyed our day at the Downs.
There was no racing there as Keeneland has racing this month.
Starting in November, racing will begin again at Churchill.

In the meantime we were searching for a good place
to have an anniversary dinner.
One of our RV friends messaged us and told us that
her son is the Executive Head Chef at a Louisville hotel,
and that we should stop and say 'hi'.
We didn't get there until 7 pm, and although he
was very busy,
he popped out and talked to us for a bit
as we were having a beer. 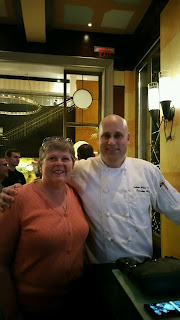 When he found out it was our anniversary,
he very graciously sent out some food he prepared for us! 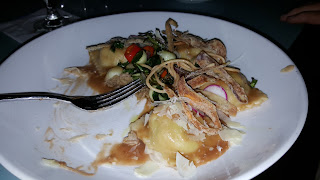 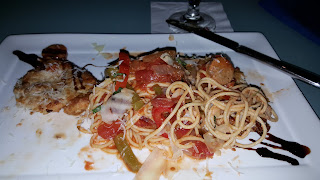 It was a nice surprise, and we really enjoyed it!

Today we relaxed a bit,
then met with a group of RV-Dreamers
at the local state park for a potluck.
It was great to get together with the few of us
that are working at Amazon. 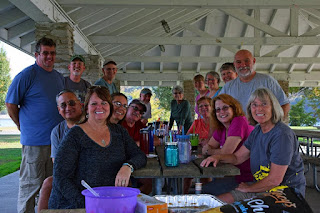 Been a great couple of days!


We continue to trudge along, just finishing week 3.
It helps to enumerate the weeks,
helps us to keep our eyes on the prize :-)

Our job picking is so much different from last year.
Obviously the walking vs. standing in one place,
but we get to see so much more of the products
people are buying.
We are still in awe of the things people buy online :-)

Right now it is not as busy.
The building itself is undergoing some major changes,
with a 3 year transition to all apparel.
There are a lot of empty bins,
and product is scattered everywhere.

Because the product is scattered between 3 different
parts of the building, our picking is too!
This creates a lot of walking, 53 miles for me last week!
We sometimes feel like we're in one of those mazes
that the scientists make mice or rats run through. 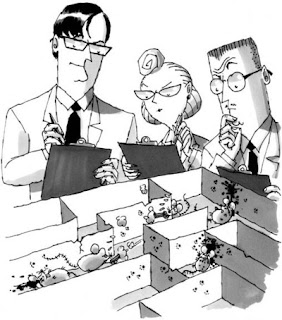 The powers that be are looking down on us laughing hysterically
as we try to make our way through the maze of bins
looking for the right ones.

Not all days are work, however.
We've gotten together with fellow Amazonians
for a little social time.. 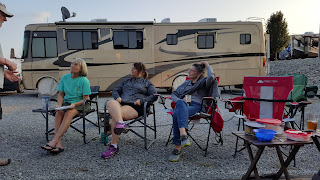 Yesterday we went to our favorite Mexican restaurant
with Neil & Nancy.
They started last week, Nancy is in Packing, and Neil on the shipping dock.

The weather is going to trend colder now,
so George got our water line ready for freezing temps.. 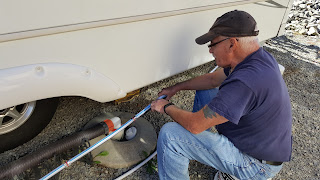 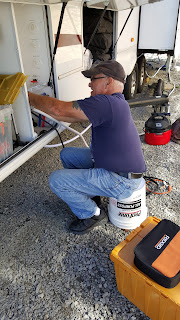 
Last week was our first full 40 hour week as pickers at Amazon.
I'm really enjoying all the walking we're doing,
but George is having trouble getting down on his knees
to pick from the lowest bins.
Amazon does provide knee pads which seems to be helping a bit.
Both of us are getting used to reading the small details on the scanner 8-)

This year they are allowing tracking devices such as Fitbits, etc.
Since we had built up some Paypal money with Ebay sales,
we bought ourselves the Fitbit Flex..
George got black, and I chose pink..

We can keep track of our steps, miles, calories burned, and weight loss goals.
It syncs up with our smartphones or computers at the end of the day,
and even tracks how well we're sleeping (or not, lol).
This week I tracked 48 miles in the 4 days, and George did 43 miles!

It's been nice running into people we met last year,
it's like family!

Yesterday we welcomed Neil & Nancy Savage to the campground!
They are starting on Monday in the shipping department.
After they got setup, we invited them over for cocktails,
and I had stew in the crockpot that we shared for dinner.
There was so much catching up to do,
as we hadn't seen them for almost two years!
It will be nice getting together on our days off.

Speaking of days off,
we've been catching up on laundry,
computer stuff,
and a bit of shopping.
We both bought new shoes for this year too.

We'll have more to report in the weeks to come!


Wow, we can't believe that 3 years ago today,
we took off from Pennsylvania on this full-time adventure.

For our own records, and to help out any
future full-timers,
we've recapped a few things:

7 workamping jobs helped with our budget.

For the past fiscal year we spent:

Obviously we have other categories,
these are just the major expense categories.

We save fuel and campground fees by workamping.
Looks like we need to work on lowering our food costs :-)

Health insurance costs were helped by Obamacare,
and George started Medicare on July 1, 2015.
Our medical expenses were so high due to
an ER visit in 2013 that I was still paying on,
and another one in 2015 that I'm currently paying on!

This year's Amazon earnings will help replenish
our savings account, and help us to get a few things paid off.
We'll continue to look for more paying jobs after we finish Amazon.