We took off from Conestoga Campground,
our summer residence, promptly at 10 am on Wednesday.
The other workampers and a few regulars gave us a proper sendoff  :-) 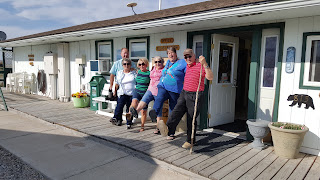 It was a nice ride on Rt 89 to Rt 90 at Livingston.
We turned east on Rt 90, hoping to make it to
Gillette, WY and park in a Walmart there.
As we started climbing a slight grade,
George noticed that the check engine light came on.
Oh how we love that light! NOT!
The truck started losing power, wouldn't go over 45 mph,
even on the flat part of the highway.

We found a place to safely pull over,
where George plugged in the code reader to see
what the problem might be.
It gave us a code that I quickly looked up online,
which told us that the fuel rail pressure was too low.
Once we got moving again, it seemed to be ok,
but to be safe I looked up the nearest Chevy dealer,
which was in Billings.
From Google maps I could see that their lot was big enough
for us to pull in with the RV, so that was a good thing.

Amazingly enough, as soon as we pulled in and
found a place to pull over in a safe spot,
one of the service techs came right out
to write us up.
He knew immediately when we told him the code
that we needed fuel injector rails replaced.
Since we always go to Chevy dealers for our services,
he could pull up all our records to see what had been done.
They diagnosed our problem,
and immediately started working on it,
after telling us the bad news that it would be
approximately $5500!
He also told us that they had very competitive pricing,
and with no sales tax in MT, that helps as well.
We've both been noticing a whine in the engine too,
which turns out is the hydroboost, so another $900 for that too :-( 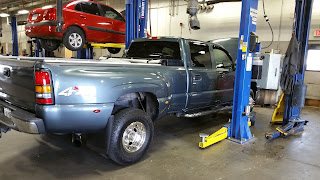 Of course we've been out of warranty for awhile now.
We actually tossed around just trading it in on a new truck,
but with limited income, that's just not possible right now.
The service manager did tell us that with this repair,
we've done everything major except the transmission and engine,
and those should last forever (so he says!).

So in the meantime we sat in the air conditioned waiting room
Wednesday night after walking across the street to Famous Dave's for dinner. 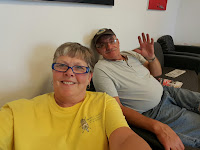 One perk is they have a cooler full of bottled water,
and fresh-baked Otis Spunkmeyer cookies on a tray :-)
That helped my mood after sleeping in our RV last night,
which was in the 80's! 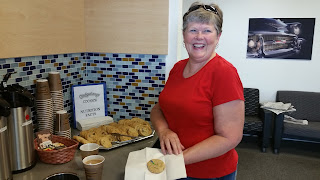 We're hoping to have the truck back today (Thursday) around 2 pm.
We'll need to make up some miles and time to get back on track,
but since we're premier members of the PDD club,
it won't be a problem :-)