As promised, the saga continues..


So, to continue...
we pulled out of the Ohio Rest Area
around 7 am on Monday,
making our way to the Camping World in Akron.

We had made an appointment to get the wheel bearings packed,
the brakes inspected, and a few little issues to be looked at.
George decided it would be good to get the valve stems changed
on the trailer tires, since this is not the only one that has failed.
He's also noticed a 'smell' coming from the basement,
and has noticed some moisture, or outright liquid in the basement at times.

Tuesday morning we woke up in the Camping World parking lot,
they pulled the RV in to get ready to tackle the issues.
Our friends Greg & Connie live nearby so they came
and helped load the basement into the back of his truck. 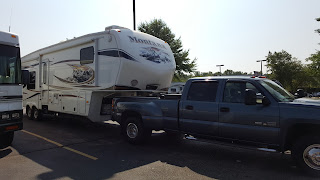 The diagnosis?
Black tank split at the seam,
and also cracked horizontally!!
On top of that, they found that our bedroom slide cable had snapped,
(apparently recently or we would have noticed).
We're waiting for the tank to come in,
and it's all covered under warranty...so far...
Thank God for Greg & Connie.
We're sleeping here at their house,
they are such gracious hosts.

Connie and I had some fun yesterday.
We went to visit the National First Ladies Library
in nearby Canton.
It is housed in the Ida Saxton McKinley home,
where she and President McKinley lived for 23 years. 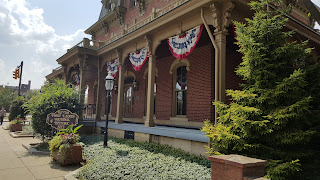 The current exhibit is The Forgotten First Ladies,
which showcases some of the china, gowns,
and letters from some of the first ladies.

We had a lovely tour guide,
who was dressed as Lucy Harrison. 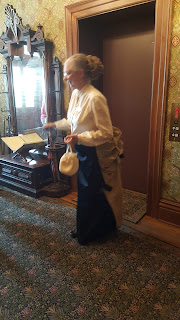 The house was beautiful, most of it recreated,
but there were a lot of original pieces . 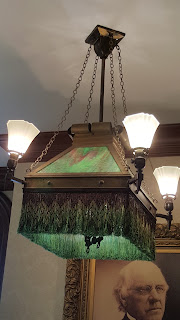 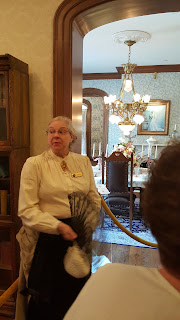 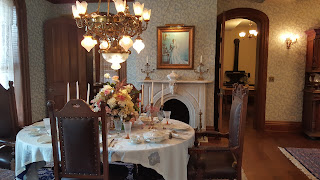 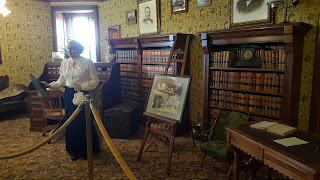 I highly recommend the tour, we really liked it!

Last night we had a great Italian meal at Papa Bear's.
George got his spaghetti fix :-) 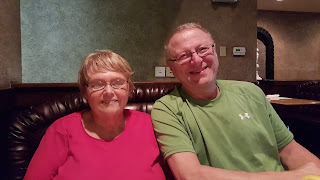 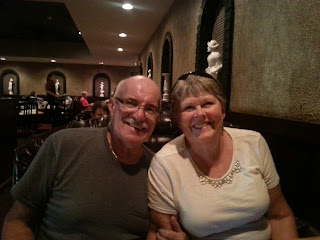 So today we are waiting to see when they can locate a black tank
to replace ours.
Connie and I decided we should take a ride to Elkhart and pick one up :-) 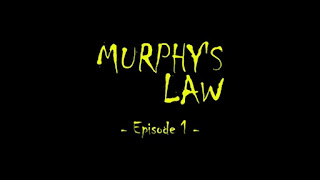