George and I took a ride north about 85 miles to Astoria.
It's a beautiful town, right at the mouth of the Columbia River.
But first, we stopped at Fort Clatsop.

Fort Clatsop was the encampment of the Lewis & Clark expedition
in the Oregon country near the mouth of the Columbia River during the winter of 1805-1806.
We were surprised at how small it is!

There were a few guides in period costume explaining life at the time...

...and a great little boardwalk trail that led down to the river..
the Lewis & Clark river.

Our next stop was the Astoria Column.

We did not climb the 164 steps to the top :-)
But we did admire the view!
Even though it was overcast all day,
the views were spectacular of the Columbia River,
Washington across the river,
and the Youngs River.

Once we oooed and aaaahed about the view,
we drove down into town to get a closer look at the river.

We hopped the cool trolley that goes up and down the river walk.
It's only $2.00 each to ride all day.

Once we saw the river from there...we hopped off and walked beside the river.
We saw some big cargo ships..

There were even some California sea lions stopped on their way to CA..

One of our favorite places to eat in Oregon, has been the Rogue Public House.

We had a great lunch there, and a beer or two :-)
One place that surprised both of us was the old Bumblebee Tuna cannery.
A stroll through there was pretty cool! 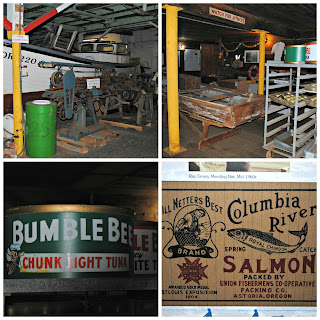 I took tons of pictures, too many to post here.
Hopefully I can get them all uploaded to SmugMug when we have free wifi!