We were finally almost at the end of a 10 day run of workamping here.
I've been wanting to spend a day with my son, Adam, but his days off are limited.
Today was one of his few days off (he works two jobs!),
so we switched with another couple so that we could spend the day with him.

I know one of his favorite places to spend time is downtown Santa Cruz.
It's not far for either of us to drive to,
so we made plans to meet him and his girlfriend, Candee, there today.

We drove over route 17, which is a nice winding highway through the mountains.
We decided to park at the boardwalk parking lot, as it is free this time of year,
and has plenty of open spots for our truck.

While waiting for them to get there from farther south,
George and I walked around the boardwalk.

This is the off-season, and being the middle of the week,
none of the rides were open.
It was raining a bit, so not like we were going
to go on them anyway :-)

The boardwalk had its 100th anniversary in 2007.
It is one of the most colorful I've ever seen..
and it brought back memories of coming up
and spending the day when I was in high school.

The beach was empty today..

Finally, Adam & Candee showed up. We all decided since the rain had
stopped, that we would walk downtown from the boardwalk parking lot.
It isn't too far a walk, and it was nice to get the exercise.
We promised them lunch, and they recommended this little place
called Kianti's Pizza & Pasta Bar

The food there was fabulous, and we were lucky enough to
be the only ones in there, as they were prepping for an employee party.

I had Kianti's Gourmet Pasta.. 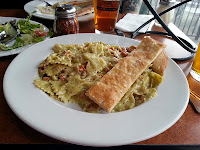 It was so nice to spend time with them!

We walked around downtown a bit.
Santa Cruz has a very colorful downtown as well..

There was a suggestion to go to this great place..
a chocolate bar :-)
Chocolate for lunch and dinner...well...I'll be! 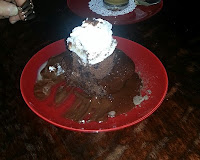 ..and I opted for a coconut cheesecake,
with white chocolate and chocolate ganache..

Good thing we had to walk back to the truck
after eating all that..

It was a perfect day!